Home » General Info » Your Guide to the Different Regions in Italy

Your Guide to the Different Regions in Italy 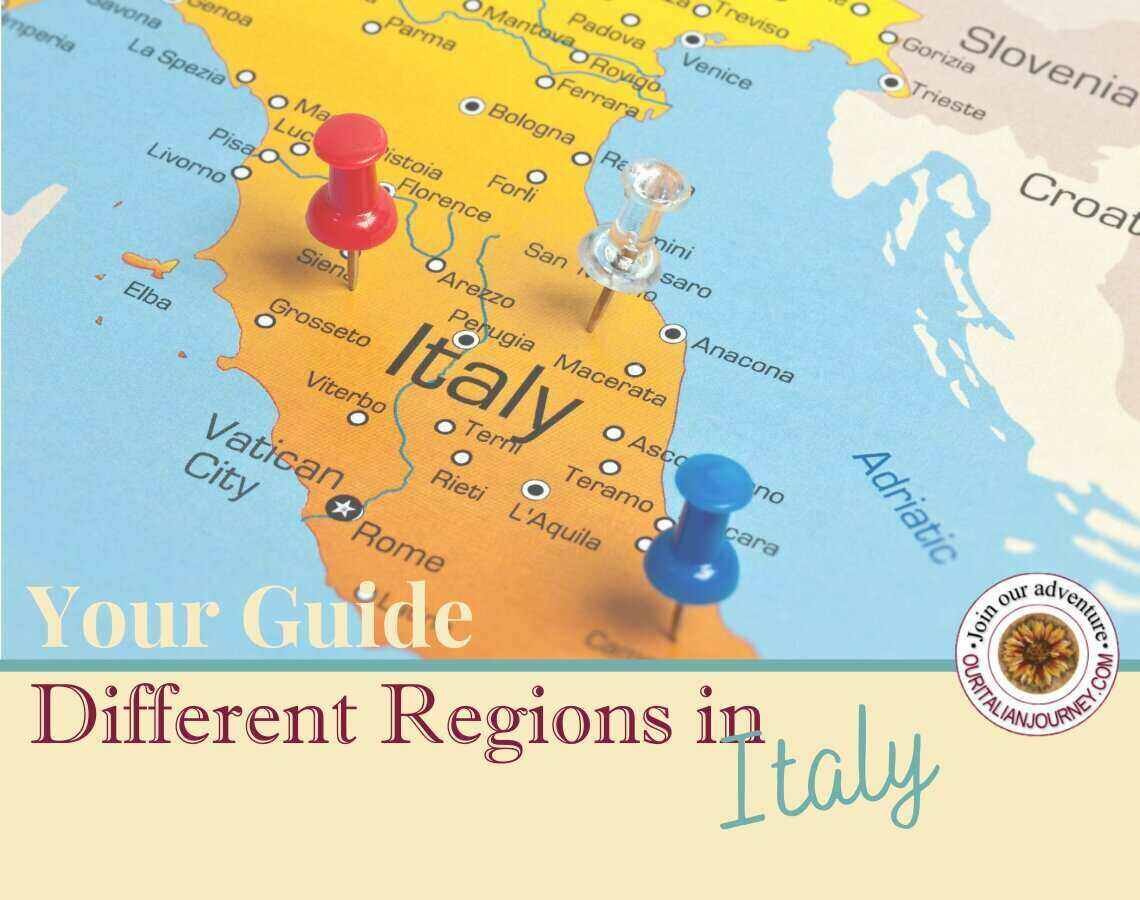 There are twenty different regions in Italy. Differences in people from various regions can be noticed in appearance, dialect, and even their attitude. You will find though, Italians are fiercely loyal to their own region, each believing that their region is better than any other in the country. This is extremely true for those that hail from the island of Sicily. Sicilians consider themselves Sicilian – not Italian.

I would also say that wine and food are significant differences in the regions. While northern Italy is considered more of a white sauce and lighter, sparkling wines, southern Italy is all about the red sauce and a deep, full-bodied tasting wine. Some recipes, being handed down through generations are made in one area and not even known about in others or, perhaps they go by a different name.

Let’s discover the twenty different regions and where you will find them.

Abruzzo, located near the center of Italy, is what I would consider a rural part of the country. Gary and I have driven through Abruzzo, but haven’t really investigated this region. Towns in this region are located in the mountains and down to its beaches. It’s hardly a touristy area as it doesn’t boast any major historic main attractions. photo: Pescara

Located in the northwest corner of Italy, close to Switzerland and France is the Aosta Valley. The beautiful Alps run right through this region. Dairy is the most important part of the local diet in this area, which includes milk, butter, and the PDO-protected special cheese – Fontina. Also, readily available on the menu is beef, pork, and goat. It’s probably one of the most beautiful regions to enjoy the outdoors in Italy. photo credit: Wikipedia

In the “instep” of Italy’s boot, you will find the southern region of Basilicata. The Apennines Mountains run right through this area. This area is quite rural and one of our favorite towns we discovered, Matera, is located here. This is the town of cave dwellings and a must-see if you visit this region of Italy. It is a poor region complete with lakes, small towns, and thick forests. See post on Matera. photo: Matera

Calabria is located on the Mediterranean Sea and occupies the “toe” of Italy’s boot. Along this coastline, you will find many coves and bays with homes around it. As you venture inland from the coast, It is also complete with mountains like the Basilicata region to its east. Especially relevant – you are forced to use a car or bus here as train travel is quite limited. photo credit: Wikipedia

The southern region of Campania has lots to offer visitors. Here you will find the famous cities of Naples, Pompeii, the Amalfi coast, and the beautiful island of Ischia and Capri. We enjoyed a few days in Salerno and loved every moment. As you would expect, the seafood from this region is fresh and amazing. See post on Sorrento. photo: Capri

Located in northern Italy, Emilia-Romagna is the home of Italy’s iconic sports cars. Here you will find the factories of Lamborghini, Pagani, and Ferrari, just to name a few. The region also includes the beautiful Renaissance cities of Bologna and Modena. Modena is famous for its dark-colored, delicious balsamic vinegar. In addition, also found here is the pretty town of Parma which is home to Prosciutto di Parma, and Parmigiano-Reggiano. Two of my favorite things. See post on Modena. photo: a factory in Parma

Friuli-Venezia Giulia is a tiny region, in Italy’s far northeastern corner. It borders Austria and Slovenia and sits on the Adriatic Sea. It’s home to the majestic Dolomite Mountains and vineyards producing amazing white wines. Located just a few hours from Venice, this area is one of Italy’s least touristed regions. photo credit: Wikipedia

Lazio is a popular region in Italy and home to the famous city of Rome. Centrally located and sitting on the Tyrrhenian Sea, there is so much to see and do in this region. Lazio is the center of Italian political life thanks to Rome being the capital of Italy and the presence of the Italian government. Most of all, it is also the home of the Vatican. Did you know that the Vatican is a separate country within Italy? Read the next section to find out the other. See post on Rome. photo: Rome

Le Marche sits between the Apennine Mountains and the Adriatic Sea. It is long and narrow hugging the coastline. I have heard that this region is one of Italy’s best-kept secrets and less expensive to live in than other areas. San Marino, a small republic sits on the slopes of Mount Titano, on the Adriatic side of central Italy between the Le Marche and Emilia Romagna regions. photo credit: Wikipedia

A small narrow strip along the coast in northwestern Italy is the region of Liguria. Its coastline is rocky and filled with cliffs. Genoa is the capital and home of Christopher Columbus. Most people know this coastal area because of the five little towns called Cinque Terre. Travel between towns is only by local train or boat, so no cars will be found on the streets. Also, another famous resort town found here is the exclusive and expensive town of Portofino. photo: Cinque Terre

Bordering Switzerland in northern Italy is the region of Lombardy. The capital Milan is the second-largest city in Italy. This area is known for its wealth, industry, and agriculture. But this location also consists of Italy’s “lake districts,” with magnificent destinations including Lake Como, Garda, and Maggiore. See post on Lake Como. photo: Lake Como

Originally, Molise was grouped with the region of Abruzzo up until 1963 and became a region all of its own in 1970. Agriculture rules in this area of Italy and they are a high producer of olive oil and wine. It is a mountainous Italian region with a stretch of coastline on the Adriatic Sea. photo credit: Wikipedia

The northern region of Piedmont is surrounded by The Alps on three sides. What is unique? The towns within this area are not located in mountains but on flat terrain – in a valley. Famous wines and some of our favorites are grown and produced here, such as Barolo and Barbaresco. photo credit: Wikipedia

The “heel” of the boot of Italy, is the location of one of our favorite regions, Puglia. This region is especially known for its olive oil and the crystal-clear turquoise waters of the Adriatic Sea. Beautiful beaches and excellent seafood are abundant here. One amazing and spectacular town to visit is Alberobello, a UNESCO World Heritage site, known for the unique cone-shaped Trulli houses. See post on Conversano. photo: Alberobello

Sardinia is a large island located in the Mediterranean Sea and a long-time favorite summer destination of Italians. It is the second largest island in Italy, second to Sicily. It is complete with sandy beaches and a mountainous interior filled with hiking trails. We have yet to visit this island but it is high on our list. photo credit: Wikipedia

The largest island in the Mediterranean is Sicily and it is chock full of history. Those that hail from Sicily consider themselves Sicilian first and Italian second. Sicily has known many settlers and has a mixed-heritage of Greek, French, Spanish, and Arabs. Sicily has a cuisine all of its own and some of the best pastries I have ever tasted. See post on Sicily. photo: Taormina

Trentino-Alto Aldige is also known as South Tyrol and was once part of Austria/Hungary. It became part of Italy in 1919. This region has lots of German roots in language and cuisine. The beautiful and majestic Dolomites and the eastern Alps are found here. See post on Bolzano. photo: Trento

Okay, seriously – who hasn’t heard of Tuscany? This might be the most well-known region in Italy. The beautiful towns that can be found here are stunning and unique. These include, but not limited to Florence, Siena, Lucca, Pisa, Cortona, Arezzo, Montepulciano, San Gimignano, Volterra, and more. This region is famous for its rolling hills, cypress trees, vineyards, and the most beautiful countryside. In addition, Tuscany is also famous for its wine, such as Chianti (the black rooster), Vino Nobile di Montepulciano, and Brunello di Montalcino. See post on Tuscany. photo: Siena

Umbria sits directly in the center of this peninsula. This area has a history dating back to the Etruscans. Less known than Tuscany, Umbria is just as amazing, in my opinion. Our favorite towns here are Assisi, Spello, Foligno, Montefalco, and the capital, Perugia. See post on Spello. photo: Arezzo

This region is famous for its capital, Venice. It is one of the most visited towns in Italy after Rome and Florence. Tourism and industry are extremely important here and home to some of Italy’s most wines including Prosecco, Soave, and Valpolicella. Top towns to visit here also include Verona, Vicenza, and Padua. See post on Burano. photo: Verona

As you can see, Gary and I have a great deal more exploring to do in Italy. There are seven regions we have not yet explored and several regions we just need to go back and spend more quality time. Italy is diverse in its culture, food, wine, and even its people. In the years ahead – we plan to do just that!

A wonderful dinner with friends last night. It was

Palazzo Pfanner in Lucca is such an amazing place

There is something about being in a train station,

There is nothing spectacular about this window oth

Looking for a book on travel? Might we suggest a t

We'd like to invite you to Italy. To enjoy our tri